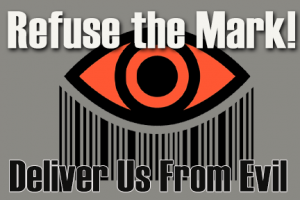 The Lord’s prayer says, “Lead us not into temptation, but deliver us from evil.”  Many translations say, “…from the evil one.”

When the Nazis forced their way into Corrie ten Boom’s family home on February 28, 1944, the family’s work with the Dutch Resistance ceased abruptly. But, not before they had hidden and rescued well over 800 Jews from certain death.

Nazi soldiers terrorized members of Corrie’s family that day, searching everywhere for evidence of hidden Jews. Thankfully, they could not find their hiding place; a secret room built into the wall off Corrie’s bedroom. Sadly, the ten Boom’s were arrested along with visiting friends, thirty-five in all, and many never came back.

No doubt, those perilous times had many convinced that what the Bible describes as “the last days” had arrived. Daniel wrote of them in his book of the Revelation. The apostle Paul detailed them in I Thessalonians. And Jesus told of what would come, in Matthew chapter 24. The book of Revelation’s chilling prophecies surely seemed to have found their fulfillment as Hitler’s third Reich stormed across Europe. However, according to scripture, certain things would have to be in place before the Biblical “Antichrist” would come. Certain signs would be evident.

The World War II years (1937-1945) gave rise to powerful dictators in Russia, China, Italy and Japan. Yet, none seemed equal in malevolence to a freakishly unstoppable leader named Adolf Hitler. If ever there was a being who fit the description of that “man of sin,” surely the German Chancellor showed all the marks.

A Type of Antichrist

Corrie and her Christian family had lived peaceful lives in Haarlem, Holland, until those years; later to become unwittingly embroiled in intrigue and danger. With Germany so close by, radio stations bellowed with talk of the new Austrian-born dictator. The pounding voice of Hitler himself, with his persuasive speeches, stole peace from many hearts. Yet, many hungry people listened to Hitler’s impassioned rhetoric, hopeful he might lift Germany out of its economic doldrums. Blindly, they tuned in, even to his talk of eliminating Jews and others Hitler deemed “unnecessary to the new order.”

As madness became reality, it might have seemed to more discerning people that this was surely the end of the world.

Not taken in by Hitler’s ear-tickling promises, the ten Boom family trusted God and His word to sustain them. But, soon the harsh treatment and disappearances of so many Jewish neighbors prompted the ten Boom’s to join The Resistance. If Hitler was not the Antichrist, he was certainly a type of antichrist—a twisted soul bent on the destruction of others.  In the end, Adolf Hitler could claim responsibility for the deaths of more than six million Jews. Not to mention, millions who fought necessarily, including countless Americans, to defeat him and his cancerous regime.

Power and violence drove Adolf Hitler, but his regime came to a terrible end. Speculation moved on then, seeking to identify the Bible’s true “man of sin” in other world figures.

Who then is the infamous Antichrist, and what are his Marks?

For centuries, Bible scholars and historians have pondered that mystery. Numerous books and films have conjectured about “The Mark Of The Beast” and the meaning of the mysterious number 666. Even nighttime talk show hosts, comedians and others have speculated about the possible identity of the “666” man. Calculating the numerical value of various names, they jokingly ascribed the number to various opposing political figures, e.g. Ronald Wilson Reagan (six letters, three times). However, they seemed to care little about the possibility that the prophecy was true.

The Book of Revelation describes the vision God gave to John the Apostle (c. 100 AD), while exiled on the island of Patmos. The book reveals that Antichrist will be a popular, charismatic figure who will apparently rise out of Europe; a restored Roman Empire.  He will win over many, if not most people with his seemingly benevolent, sincere façade. He’ll fool “even the elect, if it were possible.” However, scripture assures us his true intent is to ensnare; ultimately to steal, kill and destroy.

In Revelation 13:18, any “person of understanding” is challenged to “calculate the number of the beast, for it is the number of a man,” it says. But, what man?

I John 2:18 tells us that “many antichrists have already come into the world.” However, this ultimate “man of sin” will be revealed during the “last days.” This will be the most horrendous time ever in human and world history—the Great Tribulation.

His name? The Bible tells us that those who see him standing in the Jewish temple proclaiming himself to be God will know he is the one.

The Antichrist | Refuse His Lie

A clever liar and deceiver who will be indwelt by Satan himself—the “father of lies”—this singular world leader will demand that all people take his MARK, or be destroyed.

Revelation 13:16-17 says,  “He [Antichrist] causes all, both small and great, rich and poor, free and slave, to receive a MARK on their right hand or on their foreheads, and that no one may buy or sell except one who has that “mark,” or the name of the beast, or the number of his name.  Here is wisdom. Let him who has understanding calculate the number of the beast, for it is the number of a man: His number is 666.”

Until recently, it had not occurred to me as to WHY, exactly, Antichrist would want people to wear his mark “on the forehead or right hand.”  I believe scripture gives us the best clues.

Think of the “MARK” GOD places on those who believe Him through faith in Jesus Christ.  The LORD’S mark or seal for believers in Him also regards the right hand and the forehead:

The mark of God’s right hand of righteousness is on the believer, the Bible tells us. “Fear not, for I am with you; be not dismayed, for I am your God; I will strengthen you, I will help you, I will uphold you with my righteous right hand.” …Isaiah 41:10

The Mind of Christ

The Bible says, the “mark” of God gives believers the very MIND of Christ—His indwelling Holy Spirit confirms God’s truth, and the knowledge of Him in their hearts.

“We speak the wisdom of God in a mystery, the hidden wisdom which God ordained before the ages for our glory, which none of the rulers of this age knew; for had they known, they would not have crucified the Lord of glory.  As it is written: Eye has not seen, nor ear heard, nor have entered into the heart of man, the things which God has prepared for those who love Him. But God has revealed them to us through His Spirit.

For the Spirit searches all things, even the deep things of God. For what man knows the things of a man except the spirit of the man which is in him? Even so, no one knows the things of God except the Spirit of God. Now we have received not the spirit of the world, but the Spirit who is from God, that we might know the things that have been freely given to us by God.  These things we also speak, not in words which man’s wisdom teaches, but which the Holy Spirit teaches, comparing spiritual things with spiritual. But, the natural man does not receive the things of the Spirit of God, for they are foolishness to him; nor can he know them, because they can only be spiritually discerned. But, he who is spiritual judges all things, yet he himself is rightly judged by no one.  For “who has known the mind of the Lord that he may instruct Him?” But we have the mind of Christ.”

These are God’s promises to believers—Jesus said we “MUST BE BORN AGAIN.” A spiritual rebirth, whereby we are marked, SEALED by His Holy Spirit, that we may know whom we believe and be saved from the power of sin and death. God wants that ALL should be saved!  But, each one must humbly choose Him!

John’s vision revealed HOPE for true believers: “And I saw thrones, and they sat on them, and judgment was committed to them. Then I saw the souls of those who had been beheaded for their witness to Jesus and for the word of God, who had not worshiped the beast [Antichrist] or his image, and had not received his mark on their foreheads or on their hands. And they lived and reigned with Christ for a thousand years.” [Revelation. 20:4]

Can you see why Satan would want to steal that from believers? It’s our very salvation that Antichrist (indwelt by Satan) wants to steal!

Satan has always been a counterfeiter, holding out to human beings what seems to be gold, when it’s really “fools gold.” His plan is to place his own permanent seal or MARK on those who choose not to believe God through His Son, Jesus (Y’shua) the Christ.

Just as God’s MARK is permanent (believers sealed forever in Christ), Satan’s MARK is also permanent for those who believe him.  Revelation 14:11 tells us, “And the smoke of their torment ascends forever and ever; and they have no rest day or night, who worship the beast and his image, and whoever receives the MARK of his name.”

Corrie ten Boom and her family knew that whenever Antichrist would come, whoever he turns out to be, they must NOT take “The Mark Of The Beast.”  They chose to follow Christ, and to share the Good News (the Gospel of Christ) with others, even while imprisoned in Nazi concentration camps, that others might be saved for eternity with Him.

16 For God so loved the world that He gave His only begotten Son, that whosoever believes in Him should not perish, but have everlasting life. 17 For God did not send His Son into the world to condemn the world, but that the world through Him might be saved.  (John 3:16-17)

There are many signs in these times that scripture has warned of for millennia. Consider your eternity in light of God’s word, and whatever you do, or must suffer, trust God who is faithful and… REFUSE THE MARK OF THE BEAST!