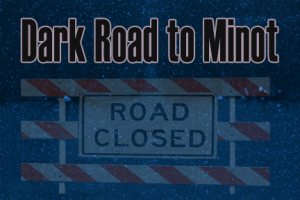 Winter is no time to travel alone on the icy roads of North Dakota with temperatures in the single digits. Still, my cross-over country music show had been booked at Minot Air Force Base, and we were determined to make the date.

We had just finished performing in Sioux Falls, and my band went home to Ohio for a week. I was happy to be with my three children in Rochester, Minnesota that Thanksgiving week, before driving on alone to Minot with all our equipment in tow; nearly 600 miles away.  The band was to meet up in Minot, December 1st.

Our touring vehicle, an older black Cadillac limousine, pulling a 14-foot U-Haul trailer, was altogether a three-ton anomaly that shook heads wherever we went. Maybe it was the pink seals boasting my initials, SM, on the limo’s front doors! My band enjoyed telling people the SM stood for Sam’s Mortuary or almost anything but Susan Meredith, the name my manager gave me when he promised to make me a big star.

The North Dakota weather forecast called for freezing temps and several more inches of snow. Although the highway was clear enough to Bismarck, U.S. Hwy 83 North would be an arrow-straight, desolate road for the next 110 miles to Minot. I was already fighting sleep, but affording a motel was not an option.

After paying my agent and bills back home, I had barely enough money to put gas in the tank. The rig only got about seven miles per gallon, and I was down to half a tank of gas. No credit cards, and less than ten dollars in my pocket.

I’d made it to a gas station where a sign read LAST STOP—GET YOUR GAS HERE. The station manager called it, “The point of no return.” I put my last few dollars in the tank.  Only my pride kept me from asking him for a free fill-up in exchange for something in my trailer. I would soon wish I’d swallowed my pride!

It was dark now, as I left the station; like driving into a cave. There would be no street lights or places to stop before reaching Minot. Snow fell harder, and the wind had picked up. Sleet swept across the car’s wide black hood, making it hard to steer, as the security of the little gas station lights faded from view.

What was I doing?  Was I really headed toward musical success for me and my children, or had I lost my direction altogether?

I had begun to pray somewhere back on the road, when calculating the amount of gas and money needed to finish the trip.  It hadn’t added up in my favor.

“God, if you’re there, please get me to Minot, please don’t let me run out of gas and die out here!”

I hadn’t thought about God in many years. I still believed He could not be known really, but my prayers that night in the dark Dakotas became more and more desperate, until it was all I could think about. Fear and begging for mercy—mile after mile!

The wind and snow blew harder now, and the windshield wipers on high could not keep the windshield clear. But if I stopped, I’d get stuck in the snow.  I had heard about people freezing to death up here. Other and wiser travelers had avoided U.S. 83 that night, as I could count the cars I’d passed on one hand.

“Please, God, I won’t ever put myself in this position again, please don’t let me die out here in this—my children need me.  Please get me to Minot, please God!”

Suddenly, the limo felt as if it would blow off the road as an 18-wheeler blew past me on my left. How could he go that fast in this? I’d been staring at the road ahead and praying so hard, I hadn’t seen him coming up on me. Maybe he would help me, I thought. But he was already gone—his huge red tail lights growing smaller ahead.

Just as I regained a steady grip on the steering wheel, two more headlights grew large in the opposite lane in front of me. Another monster blew past in the dark—the last vehicle I would see from that point on.

My fuel gauge was on E. Nearly 40 miles to go, and the tank was empty! “Please, God…!” Near panic, my mind spun, trying to think what to do.  I hadn’t seen anything but snow and a couple of “uncaring” trucks on the road for more miles than I recalled. I searched for lights of a farmhouse along the road. But visibility made my world only a little larger than the limousine.

I tried to remember anything I’d learned about God in that little church Mom had sent us to briefly, long ago.  Nice people went there—although not Mom and Dad. “Normal people,” I thought; even if they prayed to a God they couldn’t see.

Just ahead, a sign appeared on the side of the road: ROAD CLOSED AHEAD—EXIT RIGHT.  My eyes strained to see through the slush-covered windshield. “Exit right, WHERE?”

I saw nowhere to turn off. Suddenly, a huge barrier stood just yards ahead of me—six feet high with letters that read: ROAD CLOSED.

I did the worse thing a driver can do on snow and ice and slammed on my brakes, fearing there could be maybe a hundred-foot drop on the other side of that barrier. I all but stopped breathing as the massive front end of the limousine smashed through—splintering wood in every direction. I ducked as it came toward the windshield, but somehow it all blew over the top of the car. I felt the tires bump and slide as the rig began to twist to the left.

I could see the side of the U-Haul trailer, too close in my left side mirror.  It seemed forever before the car and trailer buckled in one last jolt and came to a stop.

The wind howled around me as I stepped out of the car on rubbery legs. The pavement on this section of highway had been removed, for some reason, leaving an icy stretch of dirt clods and debris.  No one had seen me go through the barrier. I was alone. The rig had jackknifed, badly twisting the tongue of the trailer. The engine was now silent.

I don’t remember being as cold as I was scared stiff, at that point, but I was thankful to be alive and unhurt. My gas gauge had read below empty for more than thirty miles, and I was certain the engine had made its last sound.

I waited to see if someone, a police car, anyone, would come. No one! I was shaking so hard, I couldn’t think. Of course, that was my problem. If I had been thinking straight, I wouldn’t be out here!

Climbing back into the car, I said what might have been my last prayer. Surely, I couldn’t survive the night there. I thought to try the key and was surprised beyond belief when the engine roared to life.

Still jittery, I rolled forward to straighten the rig, then headed back to find the exit that sign had mentioned. There it was—a one-lane path headed down to another road. Orange detour signs led me to the highway some miles up. I feared the engine would go silent again, but somehow it kept going.  Finally, another sign: MINOT CITY LIMITS.

I pulled up to the curb at the Minot motel late that night, and the limo’s huge engine died. I was safe at last. Tears came.

Did I thank God? Probably not!  But I told everyone I thought it was a “miracle.”  Next morning, when the band tried to start the engine, the gas tank was so dry it took a few gallons of gas for primer to get to a service station.

At that point in my life, I didn’t really know what Jesus had to do with anything, but after that, I was apt to think, “Certainly, God must be real.”

I suppose I’d chalked that Minot experience up to “luck” or “fate,” or “It’s just wasn’t my time to go.” I was just thankful I would live to see my three precious children—Mike, Kevin and Mindy—and life would go on.

Still, it would be eight years, before I understood what happened that night. Eight years before I would meet the One who surely heard my desperate prayers—knowing that one day I would be His.

On that dark road to Minot, a loving God had extended His amazing grace to a foolish young woman who was way too far from home. In His mercy, He had shown even me, His power to save.

[From Susan’s book, “Above Reality: Where Miracles Happen and Healing Begins” – Purchase at Amazon.com]